One of the features of the new version of Horizon View 5.3 is support for Windows 8.1, and I used this as my desktop OS of choice as I’ve worked through installing View in my home lab.  After all, why not test the latest version of a desktop platform with the latest supported version of Microsoft Windows.

Like all new OSes, it has its share of issues.  Although I’m not sure that anyone is looking to do a widespread deployment of 8.1 just yet, there is an issue that could possibly hold up any deployment if roaming profiles are needed.

When Microsoft replaced the Start Menu with Metro in Windows 8, they kept something similar to the old Start menu that could be accessed by pressing Win+X.  This menu, shown below, retained a layout that was similar to the start menu and could be used to access various systems management utilities that were hidden by Metro. 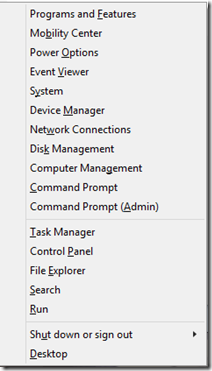 The folder for the WinX menu is stored in the local appdata section of the Windows 8.1 user profile, so it isn’t included as part of the roaming profile.  Normally this wouldn’t be a big deal, but there seems to be a bug that doesn’t recreate this folder on login for users with roaming profiles.

While this doesn’t “break” Windows, it does make it inconvenient for power users.

Unfortunately, there aren’t many alternatives to roaming profiles on Windows 8.1.  Unlike the old Start Menu, there is no option to use folder redirection on the WinX folder.  VMware’s Persona Management doesn’t support this version of Windows yet, and even though the installer allows it as an option, it doesn’t actually install.  If Persona Management was supported, this issue could be resolved by turning on the feature to roam the local appdata folder.

The current version of Liquidware Labs’ ProfileUnity product does provide beta support for Windows 8.1, but I haven’t tried it in my lab yet to see how ProfileUnity works with 8.1.

The last option, and the one that many end users would probably appreciate, is to move away from the Metro-style interface entirely with a program like Start8 or Classic Shell.  These programs replace the Metro Start Menu with the classic Start Menu from earlier versions of Windows.

I’ve used Classic Shell in my lab.  It’s an open source program that is available for free, and it includes ADMX files for managing the application via group policy.  It also works with roaming profiles, and it might be a good way to move forward with Windows 8/8.1 without having to retrain users.