(Edit: Updated to include a Blast Extreme feature I missed.)

Last week, VMware announced App Volumes 3.0.  It was a taste of the bigger announcements to come in today’s Digital Enterprise event.  And they have a huge announcement.  Just a few short months after unveiling Horizon 6.2, VMware has managed to put together another major Horizon release.  Horizon 7.0 brings some significant enhancements and new features to the end-user computing space, including one long awaiting feature.

Before I talk about the new features, I highly recommend that you register for VMware’s Digital Enterprise event if you have not done so yet.  They will be covering a lot of the features of the new Horizon Suite offerings in the webinar.  You can register are http://www.vmware.com/digitalenterprise?src=sc_569fec388f2c9&cid=70134000000Nz2D.

Instant Clones utilize VMware’s vmFork technology to rapidly provision desktop virtual machines from a running and quiesced parent virtual desktop.  Instant clones share both the memory and the disk of the parent virtual machine, and this technology can provide customized and domain joined desktops quickly as they are needed.  These desktops are destroyed when the user logs off, and if a new desktop is needed, it will be cloned from the parent when requested by a user.  Instant clones also enable administrators to create elastic pools that can expand or shrink the number of available desktops based on demand.

Although they might not be suited for all use cases, there are a couple of benefits to using instant clones over linked clones.  These are:

Although instant clones were not available as a feature in Horizon 6.2, it was possible to test out some of the concepts behind the technology using the PowerCLI extensions fling.  Although I can’t validate all of the points above, my experiences after playing with the fling show that provisioning is significantly faster and boot storms are avoided.

VMware introduced HTML5 desktop access using the Blast protocol in Horizon 5.2 back in 2013.  This provided another method for accessing virtual desktops and, later, published applications.  But it had a few deficiencies as well – it used port 8443, was feature limited compared to PCoIP, and was not very bandwidth efficient. 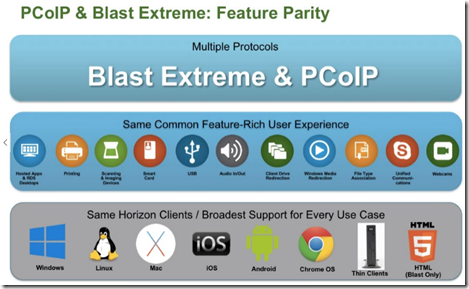 Most importantly, Blast Extreme has feature parity with PCoIP.  It supports all of the options and features available today including client drive redirection, USB, unified communications, and local printing.

Unlike the original Blast, Blast Extreme is not strictly a web-only protocol.  It can be used with the new Windows, MacOS, Linux and mobile device clients, and it works over port the standard HTTPS port.  This simplifies access and allows users to access it in many locations where ports 8443 and 8172 are blocked.

Blast Extreme is a dual-stack protocol.  That means that it will work over both TCP and UDP.  UDP is the preferred communications method, but if that is not available, it will fall back to TCP-based connections.

What if your use case calls for disabling copy and paste or local printing when uses log in from home?  Or what if you want to apply a different PCoIP profile based on the branch office users are connecting to?  In previous versions of Horizon, this would require a different pool for each use case with configurations handled either in the base image or Group Policy.  This could be cumbersome to set up and administer.

Horizon 7 introduces Smart Policies.  Smart policies utilize the UEM console to create a set of policies to control the desktop behavior based on a number of factors including the groups that the user is a member of and location, and they are evaluated and applied whenever a user logs in or reconnects.  Smart policies can control a number of capabilities of the desktop including client drive redirection, Clipboard redirection, and printing, and they can also control or restrict which applications can be run.

Horizon 6.1 introduced vGPU and improved the support for workloads that require 3D acceleration.  vGPU is limited, however, to NVIDIA GRID GPUs.

Horizon 7 includes expanded support for 3D graphics acceleration, and customers are no longer restricted to NVIDIA.  AMD S7150 series cards are supported in a multi-user vDGA configuration that appears to be very similar to vGPU.  Intel Iris Pro GPUs are also supported for vDGA on a 1:1 basis.

Cloud Pod Architecture has been expanded to support 10 Horizon pods in four sites.  This enables up to 50,000 user sessions.

Other enhancements include improved failover support to automatically redirect users to available resources in other sites if they are not available in the preferred site and full integration with vIDM.

Other enhancements in Horizon 7 include:

Horizon 7 provides another leap in Horizon’s capabilities, and VMware continues to reach parity or exceed the feature sets of their competition.